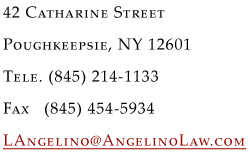 Filing for a Liquor License in New York State

A liquor license is a permit that allows a business to serve or sell alcohol. There are different types of liquor licenses that are issued depending upon the type of establishment that’s applying. In the United States, each state is individually responsible for issuing liquor licenses. Once a business receives their liquor license, it must be displayed on the premises in an area where it’s visible to all.

When a business owner opens a bar, restaurant or liquor store, among other types of venues, it’s necessary for them to apply for a liquor license if they plan to serve or sell beer, wine or hard liquor. While some businesses feel that they don’t need an attorney to help them with the application process, just one small mistake can hold up licensing – and your establishment’s grand opening – for several months.

New York State liquor licenses cover businesses for a variety of sales, both on-premise and off-premise, including:

A general bar license, called an On-Premises Liquor License, allows for liquor, wine and beer to be sold and consumed on-premise. Some establishments can sell beer for take-out, too. However, at most venues, food must be served as well.

Hiring a lawyer who’s familiar with New York State liquor laws means that your application will be prepared and filed according to the guidelines of the New York State Liquor Authority. At Angelino Law, we are able to offer advice and guidance when it comes to a broad range of liquor licenses, application procedures and license regulations.

Applying for a liquor license can be an overwhelming job, especially on top of opening a new establishment, and liquor laws vary from state to state. If you’ve relocated to the Hudson Valley and are unfamiliar with New York licensing, it’s important that you contact an experienced, local attorney.

For more information, contact Lorenzo Angelino at (845) 214-1133 or langelino@angelinolaw.com.